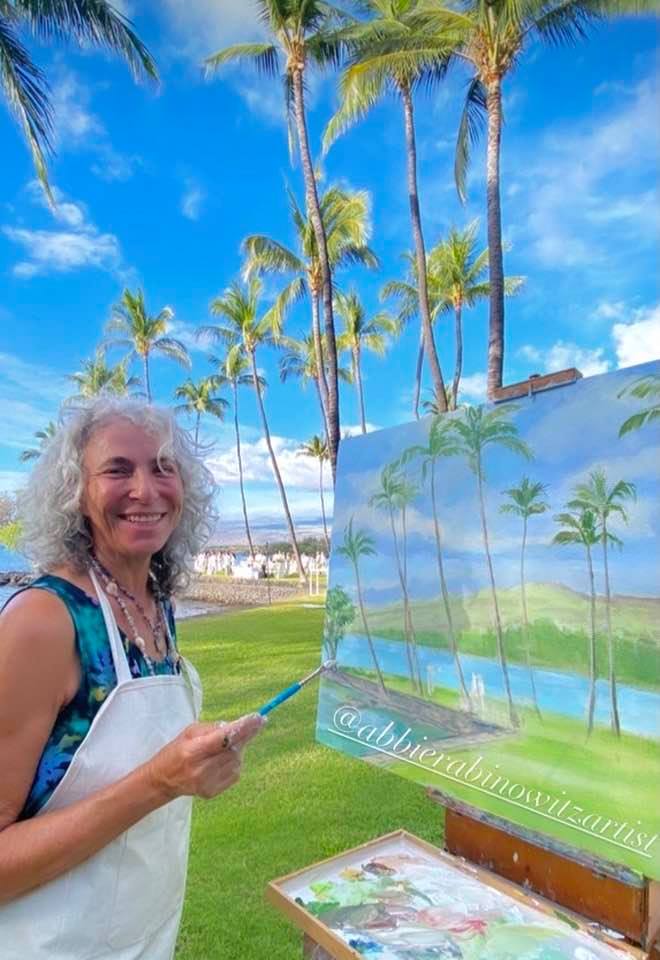 Live painting at a wedding in Kona

Over a year ago, a bride-to-be asked if I did “live painitng” at weddings. I was familiar with live painting, which is basically another term for painting in person on location at an event. She had searched the internet and found me, and enjoyed the loose painterly style of my landscape paintings. Naturally, I said yes! After all, I’ve been painting people and places ‘live’ my whole life. However, painting as large a painting as the bride requested would be more of a challenge to paint on location. I decided to use acrylics since they dry fast and I would be able to ship the painting sooner after it was completed.

Then the pandemic happened. I thought I would get a call telling me the wedding was canceled, However, since the wedding was being held outdoors and guests would be wearing masks, the event remained scheduled as planned. The weekend finally arrived and so did I, with my easel, paints, brushes, and large prepared canvas.

It was a glorious location for a wedding at a private estate on the Kona side of the island. I arrived early to set up and paint the setting from a distance. I wanted to include the tall palms, the coastline, and the distant Kohala hills. Working quickly to capture the whole scene, I painted during the ceremony and reception, and finally packed up and left when it began to get dark. Later in my studio, I added details as well as the bride and groom in the foreground.

Fortunately, the bride and the groom LOVED the painting. It captured the location and setting and most importantly, memories of the day.