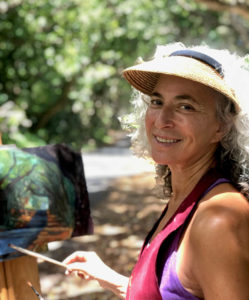 Abbie was born the third out of six children and raised in a creative household where her parents taught children’s art classes out of their large, rambling, stone house they built in rural Bethany, Connecticut. Her father graduated from Yale School of Art and her mother graduated from Cooper Union. Drawing, painting and making art was a wonted activity in her life. Visitors who came to her family home were amazed to discover that she and her siblings were allowed to draw all over the walls. It seemed only natural that Abbie chose to become an artist.

After graduating art school with a BFA from SUNY at Purchase, Abbie moved to the San Francisco Bay Area where she pursued her art. During her 30 years in California, Abbie lived on a houseboat in Sausalito, joined a commune in the Haight Ashbury, collaborated with artists at Burningman, and became a resident at a live/work arts community in Santa Cruz. She attended San Francisco State University for two years where she learned computer graphics and studied conceptual design.

Travel has played an important role in her development and expanded her vision. Her travels have taken her to over 30 countries. She lived for two years in Europe where she painted landscapes and people, and funded herself by drawing caricatures in the south of France. One can trace her adventures from the many watercolors and sketches of places she has traveled.

She paints in an expressive, painterly style, while observing from nature and painting intuitively. Her subjects include pleinair, figurative studies, portraits and painterly abstractions. She completed an emotionally evocative series of her elderly parents for her MFA thesis work.

She returned to her Connecticut roots in 2012 to be close to her family.  In 2015 she received her MFA degree in painting from Western Connecticut State University.

Abbie moved to the Big Island of Hawaii in 2017 where she has established herself as an island artist. She paints and teaches art workshops in her island studio as well as in Maui at the Hui No’ Eau, where she taught workshops as a visiting artist. She now leads both pleinair landscape and abstract painting in her Hawaii Art & Nature Retreats on the Big Island of Hawaii. See details about her art workshops and painting retreats in Hawaii.